Marriage (or “mawage” as I love to say – thank you Peter Cook!) requires a certain amount of compromise for it to be successful.  When the mister and I became engaged to be married, we each had essentially complete households – I in my apartment and him in his house.  So, when it finally did come time for us to join households, we had a lot of decisions to make about what stuff would stay and go. 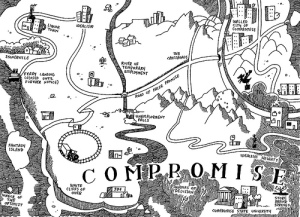 We managed to reach compromises on just about everything – my entertainment center was sold because he already had one and it fit better in his living room.  We had bought a bed together before I moved in and so his old mattress set was sent packing (and not a day too soon – it was deplorably uncomfortable).  Our cooking utensils were joined together and instructed to get along with each other (which they do to this day).  I had no problem, however, losing my silverware since I wasn’t particularly fond of it.

The one item that we did not see eye to eye about was my television.  I will admit that I am a TV person and I have been since I was very young. I could so win any 80s pop culture quiz. I remember MTV back when they played videos and I know where sliming came from on Nickelodeon.  As I have gotten older, I have had less and less interest in the boob tube, but it is still comforting to have the box nearby, even if now a days it stays dark for at least 21 hours a day.

So, when it came time to decide who’s set would go, because we did not need two, I pulled out all the stops to make sure that mine was the winner: mine was newer and nicer (Sony Vega flat screen) although it was heavier than a ton of rocks and extremely awkward to carry.  The only benefit his had: it was bigger.  Yes, ladies, apparently there is another arena where size matters. Mine was sold to our friends from India – who have it to this day – and love it as if it were their own. We did end up getting rid of the mister’s about a year or two years later when we got our current TV.

That brings me to this most recent of compromises.

About two years ago, we decided to buy a Dell laptop that would be my personal computer – I have a work lap top, but it’s a work lap top.  What I only vaguely remember (read: repressed) was that he wanted to be able to take it with him on business trips to play his Infernal Game (WoW).  He did this a few times, but it was before I was heavily into blogging and other computer activities.

A few weeks ago, he told me that he would be out of town on business this week.  Since his evenings are his to do with his as he chooses, he declared that he was “requisitioning” my lap top for his trip so that he could play his game at night.  I knew that this might come up and I was prepared to have him requisition my computer – however, it would come at a price.  Over dinner of pizza Friday night, we made the following arrangement:

In exchange for allowing Mr. X to requisition my computer from Sunday afternoon to Friday afternoon, he agreed to walk the dog 5 times at any time of my choosing and empty the dishwasher 3 times.  In retrospect, it doesn’t sound that monumental in writing, but let me tell you, that is a week’s worth of dog walking in the evenings! Time I could spend lounging in the bath, painting my toes, chatting up a luscious pool boy (who would be entirely fictional since we don’t have a pool).

However, it means that either I play on my work computer after hours which means I’m at my desk and ergo I feel like I’m working, or I do other non-computer (gasp!) things like sew or read or cross-stitch or, yes, walk the dog.  But, remembering what I stand to get out of the bargain makes it more than tolerable.

And, the mister has reported that the internet connection suckeths so he can’t even play his game.  Knowing that this was a distinct possibility, I made sure that he understood that I still get my dog walks and dishwasher-empties regardless of whether he’s actually able to use the computer. I am such a harpie.