I don’t think I could have planned a better distraction if I tried (although, the last time a planned distraction involved air travel, things didn’t go so well – but, this time it’s before any news of whether I’m pregnant or not).

Later today, I will hop on a jet plane (ok, a Southwest flight) and head to a city of old friends for a convention and comped meals.  Mr. X will be in charge of the furry menagerie and I will not have to wake up to the sounds of a cat whining or feel said cat put all of his 13.5 lbs of butterball-ness on my full bladder while I’m trying to catch those last few minutes of sleep.  Instead, I get to be footloose and fancy free. Except for that whole no drinking thing. 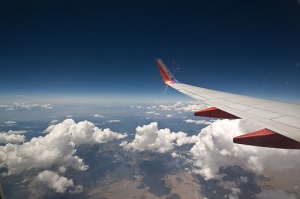 I have a note from Dr. Uterus to allow me and my needles to go through security.  Last time I travelled with my needles, the TSA people didn’t blink a collective eye.  So, I expect similar treatment this time.  I do have to figure out how to do my Wednesday evening shot – I usually do it at 6pm and will be in the air at that time.  I touch down at 6:45pm but by the time I get my luggage and get to the hotel it could be 8 easy.  Dr. Uterus said I did have some leeway on timing, but ack.  I am not above shooting up in the airplane lavatory (would that get me into the Injection Mile High Club?) but obviously, I’d like to avoid it if at all possible.  One good knock of turbulence and ouch. I’ll figure it out – I always do.  And, if I do end up doing the deed in the airplane lavatory, I will so have to blog about it!

I don’t know how much internet access I will have (or how much I will want to have) and so I may be out of commission entirely until I return on Saturday (just in time for Mr. X to leave for his travel on Sunday).

Until then, my dears, au revoir!

7 thoughts on “Have Needles, Will Travel”