I would say that I didn’t really start noticing pregnant women until we were about six months into our honeymoon phase of trying to conceive.  And then, they didn’t really bother me – I smugly thought that it would only a matter of time before I too was sporting the Bump.  But, a full year into our journey – after another six months in which I popped Clomid with no results and was told that my referral to the RE was imminent – I began to see them a little more differently. I began to see them as infertile women see them: unwelcome reminders of what I don’t have, can’t do and can’t seem to get. 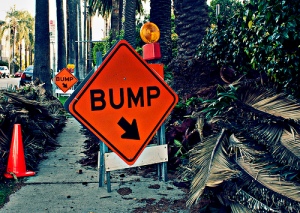 I met with the RE, who I didn’t like and knew immediately that I was going to find someone else.  I was then referred to Dr. Uterus by a friend who had already been down this ugly path and she raved about him (as I would too).  I don’t remember if she told me that he shared his office with a high risk OB or not.  I’m pretty certain I googled him and found the place’s website which very clearly shows the other doctor and what she does.  But, even then, I didn’t get it. I figured they probably had separate entrances, etc.

Little did I know.

My first visit, I’m sitting in the waiting room and I am surrounded by Bumps. Bumps of all shapes and sizes, some big, some not so big, some threatening to take over an entire corner.  And I was more confused than anything.  It wasn’t until we started treatment that I came to know just how bad it was.  There were always Bumps. Morning, afternoon, it didn’t matter.  And, it bothered me everytime I went there.

I began to complain about it to Mr. X.  I would moan and wail on the phone when I would call him after my appointments because it was just so painful, and I couldn’t keep it bottled up. Who better to share it with than my partner in crime?  He didn’t see it that way.  He told me, much later, how much he hated getting those phone calls.  I completely understand now. I would hate to get those phone calls, too.

What I have come to realize, however, is that he feels that I should get over it, move on, greet the waiting room with its Sea of Undulating Bumps with equanimity.  I’m afraid I’m not that strong of a person.  I have tried, dear Lord, have I tried.  But, I would say 90% of the time, I am at least mildly bothered, and sometimes outright upset.  I think part of my being bothered is that I resent the fact that I have to deal with the Bumps in the one place where I had thought I could be free of them, my safe haven from happy couples lovingly gazing at her navel, cheery pregnancy posters and baby magazines.  If not your RE’s office, then where?

If it was a normal waiting room, I think I would be able to deal.  I would understand that it is expected that on any given day, in the general population, you are going to run into someone who is visibly pregnant at the doctor’s office.  That I can handle.  But, the fact that it is in the place where I thought that my infertility and all of the emotions that go with it would be respected and understood, turns my normal “meh” reaction to the Bump into a full-blown “Get Me Out Of  Here” plea.

You would think that time, with its healing properties, would have worked some magic on this.  Unfortunately, it’s been the reverse.  Time, with all of its happenings – including five failed IUIs and two breathtakingly awful miscarriages – has made it that much harder to sit in the room with Bumps.  They mock me with their smooth curves and the knowledge that within that bump resides an honest to God infant – you know, the kind that I can’t seem to grow.

As much as I dislike these feelings and wish that I could look past the Bumps, I know that for now, it’s just not going to happen.  They will still bother me, without any other effort on their part other than just sitting there when I walk in.  And, I will still resent that they are there, in the one place I should not have to see them.  The vicious cycle will continue as long as I continue to walk into that room.

7 thoughts on “Getting Over the Bump”