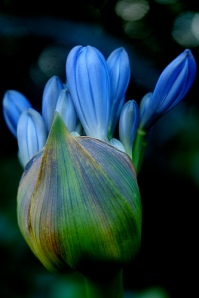 I had my blood draw this morning for my third and final beta and all I can say is thank God.  I actually find it more stressful to go to the clinic now than I did when we were just cycling.  Part of that is because those people insist on throwing out the p word at me and saying, “I’m so happy!”  And, they see my pained expression and say, “Oh, I know, I know, but I am going to be happy.”  I also cringe because it’s a fairly open office and I hated it when I was a patient and would overhear such protestations of joy.  I can’t bear the thought of someone else having to deal with that, too, in the one place where they are supposed to be able to get away from it.

And, with this last blood draw I thought with a certain amount of satisfaction that it was going to be a good while before they would have me back for an ultrasound.  I mean, at least not until the end of July, which would give me lots of time to mentally prepare, right?

Next week.  They want to see if there is a gestational sac.  This is a new one for me. With Dr. Uterus, they practically bar the door until at least 6 weeks because there isn’t much to see.  But, they also didn’t do third blood draws, so maybe comparisons aren’t as helpful here.

I have a week.  A week to calm my self down and find that mellow spot of meditation where I can still function.  Because I have to be able to function.  Hibernation, while attractive, is not an option.  And, I need to develop a method for coping with my anxiety because this may not be the end of the road and I don’t think my body can handle the up and down stress for a long period of time.  I also don’t want to drive everyone around me batshit crazy (except Mr. X.  I’m certain that he accepted this in our marriage vows).   Any suggestions for how to achieve a zen like calm in this kind of situation would be greatly appreciated.

I could have really used them this afternoon when I had to wait until 4 to get today’s results.  They were worht it, though: 15dp5dt beta = 846.  Doubling time of 44.4 hours, which while not as overachievingly spectacular as my previous 36 hours is still damn respectable.  Progesterone = 306, and yet, I still have to shoot myself in the ass.  Sing with me, “While my butt gently weeps…”