Or, when good trips to the bathroom go bad.

I can easily count on both hands the number of times that a trip to the  bathroom has scared the beejezus out of me – and I am not including the large spider in the West Virginia outhouse or the no other option use of a port-a-potty.  I mean where what you find in the bowl is not what you thought would be there.

For a lady in a family way, that usually means one thing: bright red blood.  And, I had it.

Last night around 7, after a quick trip to the grocery store, I went to the potty for a respite before making dinner.  I wasn’t really paying attention until I wiped and the previously pristinely white tissue had taken on an alarming shade of bright red.  But wait, there’s more!  A nice pool in the bowl as well.  Gives new meaning to the phrase blood in the water.

So, I quickly hurry out and tell Mr. X of the latest development in five words or less (“I’m having red!”) and we pow-wow on what to do.  I really did not want to go to the ER.  I’d had a terrible experience there the first time I was pregnant and while bright red bleeding is certainly not a great thing, I had no cramping.  I decided instead to contact Dr. Salsa who advised that if the bleeding was heavier than a period, then do not pass go, go directly to the ER.  If not, we could see him the next morning at 7am.  Have I told you how much I love my RE?

Anyway, having 20 years of menstrual experience behind me, I could tell very quickly that this was not heavier than a period and elected to stay put.  The bleeding came and went which was just awful because you get lulled into thinking that the worst is over and then the worst starts all over again.  The good news was that it wasn’t getting heavier and I still had no cramping. 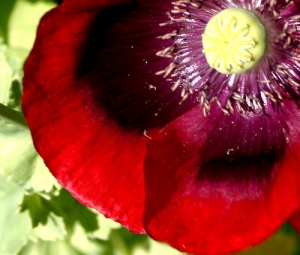 This morning, I put off going to the bathroom as long as I possibly could and finally couldn’t stand it any longer. Sure enough, still bleeding.  We headed out at 6:30 am and Dr. Salsa saw us first thing.

After a very uncomfortable encounter with the speculum, he declared that it was true blood – to which I wanted to respond, as opposed to fake blood?  But, I kept my mouth shut and deduced that he meant as opposed to menstrual blood.  And, it was definitely coming from the cervix.

Out came the speculum (thank God!) and in went the dildo cam and there was the little bugger, apparently oblivious to the commotion going on around it.  I could have sworn that I saw it wiggling, but Mr. X thinks it might have been the camera angle.  Either way, the heart was beating away.  Dr. Salsa also found the source of the bleed: a blood vessel outside of the uterus had likely been broken by the overly aggressive tentacles of the growing placenta, which he – no kidding – likened to a tumor.  This of course required me to say in my best Ahnold voice, “It’s not a tuh-muh!”

Dr. Salsa declared that he was not concerned, particularly since my cervix was shut tighter than the credit markets.  Still, I’m on somewhat modified duty on a wait-and-see basis.  Today’s highlights have been little to no cramping and brown spotting/bleeding.  I’m learning the hard way that when it comes to me and the big P, there is never a dull moment.

Also, I had planned on posting a lovely little entry yesterday since yesterday was our bi-weekly check up appointment at 9w4d or 9w6d, depending upon who’s method you use.  Everything looked good – heartbeat was 180, measurement was at 9w5d and we saw little arm and leg buds.   We’ve never made it this far before – with the first, the baby died at 9w2d and with the second, it didn’t make it past 8w6d.  So, it was quite the milestone and while it is not the same as an all clear, we savored it nonetheless.  Needless to say, this has been tempered a bit by last night’s fireworks.  While we’ve made it farther than ever, we were reminded that we’re not out of the danger zone.