Rex turned seven months old on Sunday.  In response to a picture of Rex I posted on my Facebook page that evening, one friend said, “didn’t he just turn six months?! Time flies it seems for everyone. 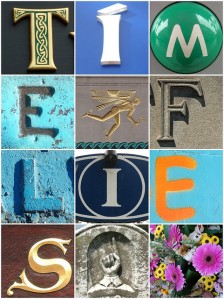 These last seven months have been some of the longest of my life, no doubt in part due to the fact that I’ve been awake far more during their waking and non-waking hours than I would care to think about.  Even after we all started sleeping for longer periods, though, the time alternately dragged or flew.  I think this is because our lives are still in a state of flux as Rex grows and changes almost literally before our eyes.  Time seems to fly when things are routine, but when things are constantly changing, you don’t have time to get used to the new normal, let alone get into a groove that lets the time fly by.

But, why would you want time to fly, you ask?  I read so often new mothers with babies of Rex’s age and even younger wanting to keep their babies this age for all eternity.  And, I frankly have to admit, I don’t get it.  I really don’t.  I can’t wait until my child can feed himself and begin to communicate with us even if it’s sign language for “give me food, bitch!”  He has already started being able to give himself a bottle and it’s been this side of heaven for me. Look Ma, no hands! I can put him in the boppy with a bottle and gaze lovingly upon him as he stretches out like a fat cat nonchalantly sucking down his Similac Crack.

Still, there’s that little voice in my head that says, “remember this time. It will be gone before you know it and the kid will be 5 and no longer suffer your hugs and kisses.”  Right now, the overwhelming part of me says, “please, let’s get to 5. At least then he can wipe his own behind.”

Part of my antsy-ness to get him out of babyhood has to do with the fact that even though I’ve been taking care of an infant for seven months now, I still feel like I don’t know what the hell I’m doing.  Sure, I can diaper him up in 15 seconds while lecturing him on proper changing table etiquette (twisting one’s body to get to the baby lotion is not acceptable while mommy is trying to cover your boy parts) and I can feed him a jar of pureed chicken and rice without getting too much on him or me.  But, I still don’t feel competent, in charge, in control of the situation.  And boy does that bug me.  Still.

Part of me thinks that once he reaches that age that I can talk with him, I can at least try to have a conversation with him in which we can discuss such serious topics as poop, pee and other topics of inherent interest to the below 3 set.  For now, he is full of grunts, screeches, screams, and singing notes going over several octaves.  He’s right where’s supposed to be developmentally. I’m just the one with the itchy finger on the fast-forward button because there’s still not a whole lot that we can do together.

Remind me of this, will you, when I’m lamenting that he’s 5 and I can’t believe how the time has flown?

5 thoughts on “Tempus Fugit and Forget It”