There is a pint-sized biter in Rex’s toddler room.   One of those adorable little persons is sinking their fangs into the delectably chubby limbs of their unsuspecting classmates.  Rex was not in this new classroom a full week before he was a victim of the Little Chomper.  We were told that Rex attempted to pick up the other child’s sippy cup after the child had put it down  thus provoking the bite.  He came home that day with a nasty looking welt on his arm but otherwise seemed no worse for the wear.  Less than a week later, I received a call from the daycare reporting that the same child had bitten my child again! and this time, there was no apparent provocation on Rex’s part. 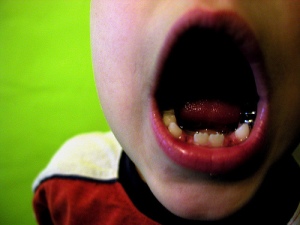 Not the Culprit - Via Creative Commons

Our concern for Rex’s safety soon morphed into anger that the Little Chomper was allowed to roam free in the general population after such heinous crimes against my sweet blonde cherub.  Because, now, it seemed like Rex’s bites were personal.  Little Chomper obviously had it out for my kid since LC had bitten him twice, one time of which was unprovoked.  Typical toddler behavior you say, total vampire tendencies I say. It is obvious that Little Chomper vanted my baby’s blood.

For their part, the daycare has been annoyingly adult about the whole thing.  They won’t share with us the identity of Little Chomper because they’re progressive like that or perhaps they knew that if we were told we would give the kid the evil eye every time we dropped off and picked up Rex.  And rather than put the offender in the stocks (I bet those Puritans would have obliged me) to ponder his or her biting ways, the plan going forward has been to keep Little Chomper and Rex separated in the classroom.

This plan so far seems to be working.  There have been no further biting incidents against Rex. But, Mr. X swears that Little Chomper struck again the other day and this time the victim was Rex’s BFF.  Mr. X might even have figured out the identify of the Little Chomper.  Better get those pint sized stocks ready.