I love this picture. Pssst! You wanna go to the secret bunker? It’s a secret, but here’s a sign telling you where to go! 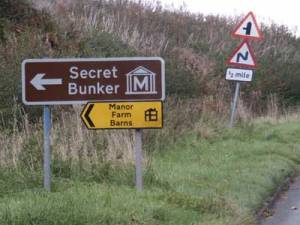 I really wish I had something similar for 3 year olds, like a mentor parent who magically appeared in my dreams and warned me of the oncoming drama that is Living With a 3 Year Old.  It’s like the best worst kept secret of parenting I have encountered so far. The terrible twos? Cake walk compared to the Threes.  Just because they can talk and communicate more does not mean that they get easier to deal with.

Only my BFF from high school with a recent three year old (who is now 5) even hinted at it and even then, she was pretty derelict in her duty to warn me of the oncoming storm.  Even my parents were not helpful – my dad still swears up and down (and side to side) that he loved my 3s.  They were ‘magical’ in his words.  I don’t know what drug he must have been on at this time, but since it was the 70s, I’m sure it’s banned now for causing cancer or hallucinations or the munchies.

So then Rex hits the 3s and I’m thinking, this is gonna be good! He’ll be potty trained! He’ll tell us what he wants! He’ll graduate to a big boy bed! He will start resembling a somewhat rational child!

And, the rational child part was just a total pipe dream. Rational thought has flown out of the window, gotten on a plane and landed in Outer Mongolia.  You are left with conversations like this:

Rex: “But, mommy, I want the blue popsicle!”

Me: “We don’t have any more buddy. Remember we just had the one.”

Rex: “But I want eeeeeeeettt.”

And around, and around and around we go. When will he stop? No one knows.

Perhaps even more discouraging is being told by professionals that this is normal.  Which means, all of my bitching and moaning is even more misplaced because it is just part of being a parent. “Suck it up!”, I tell myself.   “This too, shall pass.”  And, in the really dark moments, “Keep calm, he’s almost in bed!”.

I’m sure it is a mortal sin to want your child to grow up, but I would really love to hit the fast forward button on his DVR. Please?