First, thanks to everyone for your good wishes on my biopsy today! Here’s the rundown:

The Good: the biopsy itself took maybe a minute.  For some reason, Dr. Uterus thought I had had one before, so I politely informed him that while I had partook of the panolpy of infertility abbreviated procedures (HSG, SHG, IVF, IUI), I had not had the pleasure of an endometrial biopsy (which I don’t think has an abbreviation). But, I’m always one for a new challenge!

The other good: NO MORE BUTT SHOTS!!! Can you tell how excited I am?  My tush may never forgive me – my glutes were still sore from the shots in March. Yes, March. But, truth be told, they were only sore when I poked.  Which I don’t do often in polite company. 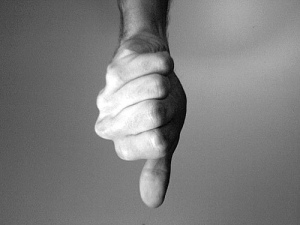 The Bad: As with most things in life, there are more bad than good things to report. First bad thing: we won’t know for almost TWO FREAKING WEEKS if the hoodwinking worked, during which time I will already be popping the Estrace pills.  Thankfully, the butt shots will not start up until some time after that.

Second bad thing: I need another SHG (insert collective ‘boo’ here).  My first SHG last December before our IVF this spring didn’t go so well.  In fact, of all of the procedures I have had where I was not sedated, this one by far sucked the most in terms of sheer agony.  In other words, I put the hysterical in sonohysterogram.  I reminded Dr. Uterus of what a nasty time I had of it last time and he offered to use a different catheter this time.  I’ll take it!

Third bad thing: it feels really, really weird to have the inside of your uterus scrapped.  I don’t think I need to elaborate.

Fourth bad thing: CRAMPS!  Luckily, they heeded the smack down of the Advil I took when I got home.

The Ugly: I have mentioned before that Dr. Uterus – for some imperceptible reason likely only known to him – shares his office space with a high risk OB.  If I didn’t seriously think he was the second coming, I would find me an RE who did not appear to be so insensitive.  On any given day, there are very pregnant ladies in the waiting area with their husbands watching as the infertile girls come in and sign in.  We are so easy to pick out – looking straight ahead so our gaze doesn’t bounce from belly to belly to belly.  No tell-tale bump, and no escort.  Most of us go it alone except for those important visits (like the first baby ultrasound or the IUI).  It can be so demoralizing when the room is filled with unborn children and their mothers and you walk in, alone and barren as a field after a harvest.  The Infertile Freak. I imagine it’s what the perp walk feels like.

What is so frustrating is that you are surrounded not only when you go in – I usually run into them when they are going on the elevator and I. Just. Know. that they are going to this office.  Today was particularly bad because I was waylaid behind a very pregnant woman and her husband (who frankly looked like he couldn’t even figure out how she came to be pregnant, let alone which direction down the hall to go).  I have to walk behind them down that Long Corridor to his office and then wait behind her while she signs in and then stands there, with her huge belly mocking me.  Finally, she realized that I needed to sign in too and moved out of the way.  I wanted to run as far away as possible from those bellies.  It was like a horror movie.

But, I didn’t.  I walked with as much grace as I could muster to a seat that was not connected to any others so one of those bellies could not park itself next to me.  I knew that they were all looking my flat stomach and thinking to themselves, “Oh, poor thing, she’s here for the infertility doctor.” And, simultaneoulsy thinking themselves to be so lucky to have a living infant growing inside of them.

I sat down and promptly opened my book, while willing Dr. Uterus’s nurse to come get me so I wouldn’t have to fight the urge to look at what I was missing.

12 thoughts on “The Good, The Bad and The Ugly”